Focus, concentration, endeavour, planning. All of these things are needed to reach any height, obtain any position different to where you are currently.

Realize that anyone who has anything in this life has obtained it through some effort of some kind. Even in supreme creation, what I call creating from a purely meditative state, takes training, discipline and attention to obtain the necessary state of mind.

Everyone has put in some form of effort somewhere, and where they are is defined by the effort they contributed.  This is a good reminder. 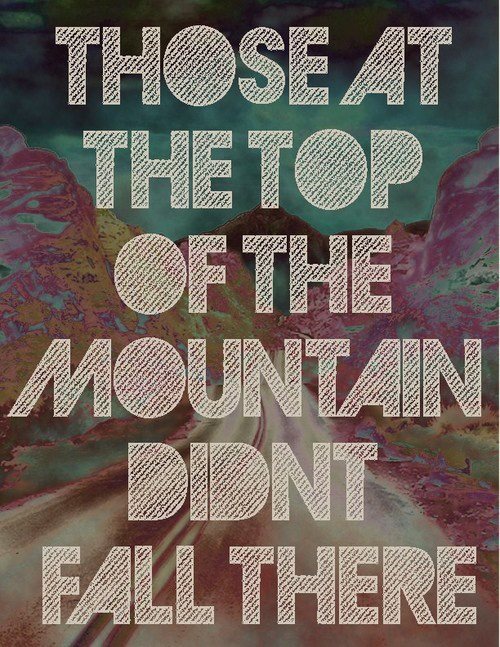 Those at the Top

I met Kevin Rudd once a couple of years ago before he was the Prime Minister of Australia.  It was at a local restaurant in his electorate in Brisbane.  He’s a sharp chap.  Clean dress.  Quick mind.  Academic type.  I like him.  We spoke about general things and he asked me how many jobs my company would give.  I said about 30, but I was thinking to myself, “I’m planning to have the manufacturing done in either Malaysia or Singapore.  It’s much better there: lower costs, higher quality.  The headquarters I’ll be moving to the US just as soon as I can. That’s where the market is”.  But this didn’t need saying.  It was a pleasant exchange.  He knows what he is doing and the woes of Australian manufacturing industry is for another time, Insha Allah.

I’ve been thinking about what he was most concerned and interested about in our conversation: jobs.  “How many jobs will I give?”  Why?  Why the focus on jobs, on money, on being busy?  Well there are two reasons that I have worked out.  One is cynical and other one is naïve.

That people need to be busy to have a “satisfactory” life.  Really?  Working 40 hours a week doing something you don’t really have a say in, or doing the same repetitive task over and over?  Computers and robots can replace most jobs in the world now, and they will eventually – in manufacturing they already have.  So who wants a job where they’re just a robot?  No one.

The present western system of social infrastructure (i.e. Government and the services provided) relies on taxes to exist – contributions from the people in the society served by the Government.  Tax on income (income tax) and tax on things you buy (sales tax) give all the funds needed to pay for the roads; the health care; the education and the entertainment.  Sell a few bonds to cover the difference when it’s needed.  Tax comes from peoples’ pay.  Pay comes from their jobs.  They pay their income tax before they get paid.  They pay their sales tax when they spend their pay.  So people need a job to keep the government going. Simple really.  Why is this cynical?  Because a “job” is no longer a “nice” thing, and a “government” is no longer efficient at providing what it’s supposed to give.  It’s a very expensive service.  Health care in the UK anyone?  Legal support in the US my friend?  Roads and communication systems in outback Australia?

A Job “works” in our current society.  It’s the basic fundamental unit that makes everything function. Get more jobs, and everything will be all right.

However that only applies if you have an infinite amount of everything to consume, to make, to be busy in a “job” with!  We don’t.  We’re reminded every day about how small this little planet of ours actually is.  Global warming, water pollution, land pollution, overcrowding, slums, dying soils, E.coli deaths from hamburgers, anti-biotic resistant bacteria – super bugs, mad cow diseases from feeding cows dead chickens… and so on and so on… This is what has been created: the consuming, un-conscious monster, stemming mainly in the US in the 40’s, 50’s and 60’s, mainly to provide more jobs, mainly to provide more taxes, for more Government!  More, more, more.  More profit, more food, more cars.  More everything.  But is this still working?

The average American – the average westerner – consumes about 90 kg of meat each year.  Such a high meat consumption is way above what a human body needs and leads to all sorts of long-term social health issues (besides being overweight, there’s slow bowel movements leading to bowel cancers, transferring diseases from animals to humans and I don’t want to go on).

If the average western person simply halved their meat intake, all the current overproduction, animal mistreatment, pesticide pollution, over subsidization and everything else associated with this industry would stop.  Over night…..  So why doesn’t it?  The need for more, more, more, and the program we have in us that drives this. Besides, what about all those “jobs”  What will people do???  :o)

To pay for government you need taxes, for taxes you need jobs, for jobs you need business, for business you need consumers…  So the western economic system, lead by America, has become the best consumer-job-tax-government model in the world.  Around and around and around we go!  What a ride!  Stop I’m getting dizzy and want to get off!

It’s a dangerous little trap we have caught ourselves up in.

The irony of it all: mediation, the key to a fulfilling, happy life, takes almost zero resources to carry out.  That’s the Universe laughing at us!

“JOB” ends up being a pretty dangerous little word.

Don’t get me wrong, I don’t worry about this stuff.  I just ponder it, working out how it all works.  How we work.  We, people, will always do what we have always done: our own thing.  So, don’t stress.  Just become aware, conscious – really conscious – of what you are doing and you can decide if you want to keep doing it or not.

Oh, yeah, and the solution to all of this is two 2 things.  The first is to pay for government budgets entirely with tax on company revenues (not profit, revenue) and hence cancel all personal and sales tax. This will put the soul back into the company,  and give people the freedom to grow and expand as they wish, as we have always done.  The second thing is to create democratic, participation  workplaces.  This makes your job a nice thing to do.  Train people in what this means, at school, in companies.  Everywhere.  (BMW and GE already do it)