I was recently watching “An Inconvenient Truth” by Al Gore again.

Again I was reminded of a large amount of doubt and misinformation wandering about the world on the topic of global warming.  Like a frightened rabbit, the lights of the oncoming truck have frozen the collective we to the armchairs and to inactivity.

Al Gore put it very well: out of a study of 928 scientific journals over a 10 year period all 100% documents concurred that man was causing climate change, principally from CO2 emissions.

In the face of this evidence, the objective of a small, well-funded group was to “Reposition Global Warming As Theory rather than Fact” (from a leaked internal document).

Are they succeeding?  Simply, Yes.

A public survey of popularist non-scientific articles (636 over 14 years) showed that a massive 53% throw doubt on whether global warming is an issue or not.

Has anything changed in the 3 or so years since this film?

I wondered what was happening with the melt rates on Greenland in recent years, since the film.  A quick search of the web revealed that the highest rate ever recorded was in 2007.

Then I came across this article dated 27th May 2009.  Here’s an excerpt: http://www.ucar.edu/news/releases/2009/sealevel.jsp

…To assess the impact of Greenland ice melt on ocean circulation, Hu and his coauthors used the Community Climate System Model, an NCAR-based computer model that simulates global climate.

If Greenland’s melt rate slows down to a 3 percent annual increase, the study team’s computer simulations indicate that the runoff from its ice sheet could alter ocean circulation in a way that would direct about a foot of water toward the northeast coast of North America by 2100.

This would be on top of the average global sea level rise expected as a result of global warming. Although the study team did not try to estimate that mean global sea level rise, their simulations indicated that melt from Greenland alone under the 3 percent scenario could raise worldwide sea levels by an average of 21 inches (54 cm).

If the annual increase in the melt rate dropped to 1 percent, the runoff would not raise northeastern sea levels by more than the 8 inches (20 cm) found in the earlier study in Nature Geoscience.

But if the melt rate continued at its present 7 percent increase per year through 2050 and then leveled off, the study suggests that the northeast coast could see as much as 20 inches (50 cm) of sea level rise above a global average that could be several feet. However, Hu cautioned that other modeling studies have indicated that the 7 percent scenario is unlikely.

In addition to sea level rise, Hu and his co-authors found that if the Greenland melt rate were to defy expectations and continue its 7 percent increase, this would drain enough fresh water into the North Atlantic to weaken the oceanic circulation that pumps warm water to the Arctic. Ironically, this weakening of the meridional overturning circulation would help the Arctic avoid some of the impacts of global warming and lead to at least the temporary recovery of Arctic sea ice by the end of the century.

Reference to the recent melt increase rate of 7% per year is obfuscated in the article.  The key observation is: melt rates in Greenland have been increasing at 7% per year.  Why focus on less alarmist scenarios of 3% and 1%??  Less alarming I assume!

The assumption is that by 2050 the melt rate “levels out”.

This doesn’t make sense.  The earth is warming?  Why would melting ice slow down?  Wouldn’t it actually get faster?? Aren’t CO2 levels at all-time high??  They aren’t decreasing and there is no expectation of them to reduce to below pre-1900 levels for many 100’s of years.  So why would the melt rate reduce from 7%?  One would expect it to increase!!

Let’s look at some facts a little more clearly.

In 2006 the estimated ice melt rate was 239 cubic kilometres per year.

There are 2.85 million cubic kilometres of ice in total in Greenland

The 7% increase per year was determined by looking at the change in earths gravity.

With an opening comment like this one:  “In the past, the Greenland ice sheet has grown when its surroundings cooled, shrunk when its surroundings warmed and even disappeared completely when the temperatures became warm enough.” ; it kind of says, “ho-hum, what’s the problem.  This stuff happens all the time”.

Well, there’s no problem really.  Just a few extra meters of sea level, no freshwater in central Asia and extreme arid conditions in what are presently bread bowls of the world.  Not much when you look at after all.

This does happen, but the natural cycles are every 10,000 years or so.  Plants and animals (including us) can adapt over that time frame.  But over a decade?  They – and we – cannot.

Unfortunately, I don’t expect any helping hand to come from the sky to pull us from the rising, warming waters.  We’ll just have our equivalent “boiling alive”, well most of the human race will anyway.

Major climate change is here to stay.  CO2 levels, like that of CFCs, are at highest levels ever recorded or measured in the last 650,000 years.

Melt rates are measured to be increasing at 7% per year.

And with the Antarctic showing evidence of beginning the melting process as well.

On a less alarmist note, I created my own “climate change model” to predict sea levels dependent solely on melt rates from Greenland.  I assumed all ice cap meltwater goes into the sea, and I assumed no makeup from snow.

Being an exponential relationship, nothing really happens until towards the end, which is kind of the scary thought – lots of nothing for many years, and then relatively quickly meters of water in only a handful of years.  In the early years, it’s all nice and small incremental change, but as rates increase faster and faster the power of compounding kicks in.  In less than 39 years, sea levels rise by 7.2 meters.

If one uses that exponential relationship, then Greenland ice cap and the sea levels will rise by 7.2 meters by 2021 – only 11 years away.  I’ll be keeping an eye on what the melt rates are doing in Greenland!

Here are the results:

It all happens in the last few years – as the last of the ice slips off the land, and sea levels rise exponentially.

This does not consider the West Antarctic ice sheet (another 7 meters of water if it melts).

I’ve seen a few less informed – or rather paid well by others – parade the Global Cooling myth, but I think for little more than ego aggrandisement and their hip pocket.  I like this succinct summary:

“This hypothesis never had significant scientific support, but gained temporary popular attention due to a combination of press reports that did not accurately reflect the scientific understanding of ice age cycles, and a slight downward trend of temperatures from the 1940s to the early 1970s” http://en.wikipedia.org/wiki/Global_cooling.

Then have a look at the most vocal proponent Don Easterbrook

Hey, I’m going to grab a nice book or three, find a nice place and watch what happens over the next 10 years.

The last 10 have been a ripper for change across the planet.  The next 10 will be a rip-snorter!!

“The study also shows that seas now are rising by more than 3 millimetres a year — more than 50 percent faster than the average for the 20th century. Mernild and researchers from the United States, United Kingdom and Denmark discovered that annual precipitation decreased between 1995 and 2007. The ice sheet also shrank at a higher rate.”

Depending on the source, Albert Einstein referred to compound interest as the eighth wonder of the world, the human race’s greatest invention, or the most powerful force of the universe.

The sad fact is that for the next 30 years or so, the “measured” rate of increase will be small.  It is only the last 5 years where the water level rises dramatically.  Boiling the frog?  Absolutely.

That’s what this is all about.

There are solutions but that’s not what this blog was about, now was it? 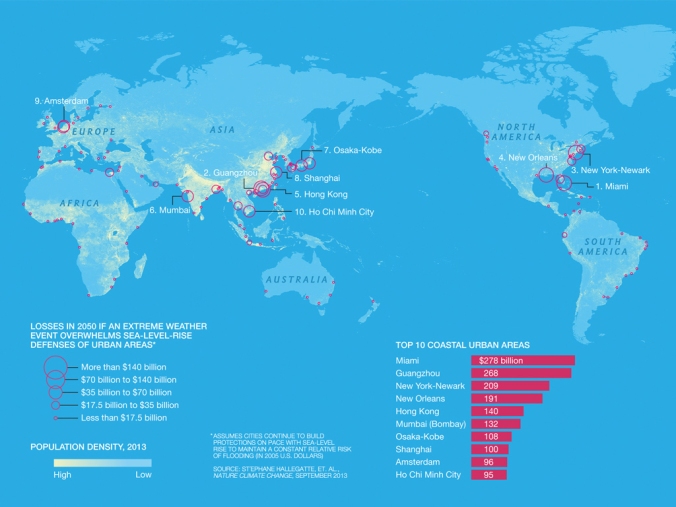 Article from BBC on what’s happening in Greenland in 2019: